Memories at the Meadows

The center opened in May 1956. An estimated 5,000 people came to the grand opening to witness this one-of-a-kind shopping experience. With the tagline “A row of stores under a common roof,” it was the first shopping center in Terre Haute. At that time, the parking lot, which could hold 1,500 vehicles, was the largest illuminated parking area in the state.

At the time, the center was described as a more than $1 million, 18-acre development, designed by Yeager Architects, with escalators operating between two levels of the building. The original pamphlet for the center expresses “a dream of ten years study and planning” and designates it as the first shopping center in the nation to offer escalator service. Lower-level tenants included Kathleen King Beauty Shop, Edward Leach Barber Shop, Terre Haute Glass, Security Loan Company, Bronson Insurance Agency, and Herm Ermisch Cleaners.

Woolworth’s and Kroger were the anchor stores when Meadows Center opened in 1956. The Kroger store was advertised as one of the largest in the state of Indiana. (Martin Photograph Collection, Vigo County Public Library Archives) 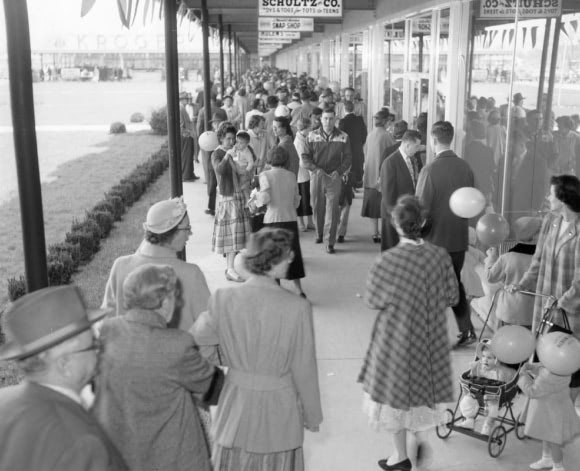 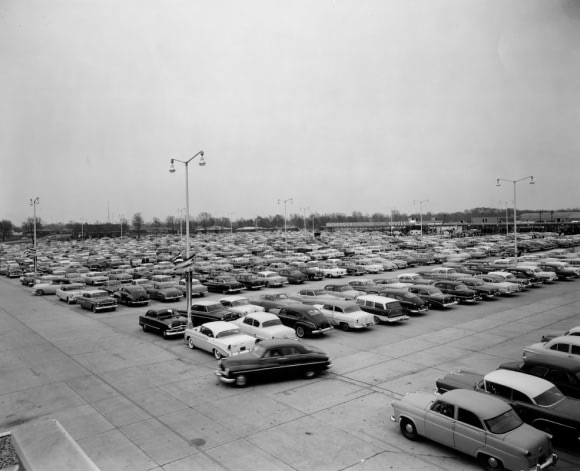 The largest illuminated parking lot in the state of Indiana at the time, the Meadows Center lot could hold 1,500 vehicles in 1956. (Martin Photograph Collection, Vigo County Public Library Archives)

Through the years, Meadows Center evolved. In 1958, the Vigo County Public Library opened a branch, which served as the first library in a mall in the state. In 1972, the famous architect, Juliet Peddle, was part of the effort to update the complex. Later, after renovating in 1982-83, Meadows Center became the Meadows. October 28th, 1970 saw the addition of a movie theatre which remained open until 2014.

​In 2017, five local business owners joined forces to purchase a place that held so many memories for them. They came together to form the Meadows Development of Terre Haute: Polly Bryan, Ace Blind & Drapery; Steve Heck, Complete Outdoor; Linc Hobbs CPA, Hobbs & Co.; Ray Sumner, SMC Inc.; and Mark Zimmerly, Zimmerly Development, Inc. The new owners, all rooted in Terre Haute, each have special ties to the area and describe their memories of the Meadows fondly.

“My first job in Terre Haute was right across the street from the Meadows,” states Linc Hobbs. “I remember how busy the place was, and I thought, ‘What a great piece of property right in the middle of schools and residential areas.’ I would like to see this place become somewhere that people would want to drive or walk to and shop or eat with family and friends. I think we all can make a difference in this neighborhood.”

Call it nostalgia, but the fact is that, like all the new business owners, Mark Zimmerly’s passion for his city drives this venture for him.

“Having grown up in the Terre Haute area and living here all my life, my own existence starting at relatively the same time as the shopping center, I’m anxious to grow this piece of history that influenced my life and everyone else’s of the generation who grew up on the Eastside and can remember the excitement in saying, ‘Let’s go to the Meadows.’”

It is 2018. While technological advances have made it easy for consumers to spend their money without leaving the couch, there will always be a need for places like the Meadows. It remains a vital part of the community and brings life to the 25th Street area. It is 2018, and the future of the Meadows is bright.

To establish and develop an area of local prosperity, community support, and individual growth, where when one is successful, all become successful

Part of the Community

Nod to the Past

Commitment to the Future

the Meadows Development of Terre Haute

Five local business owners came together to form the Meadows Development of Terre Haute: Polly Bryan, Ace Blind & Drapery; Steve Heck, Complete Outdoor; Linc Hobbs CPA, Hobbs & Co.; Ray Sumner, SMC Inc.; and Mark Zimmerly, Zimmerly Development, Inc. With such a diverse group of business owners, the vitality of the Meadows will benefit from the variety of their skills and expertise, as well as their business minds.

Learn more about leasing at the Meadows
Leasing info